The second principles’ declaration of the reform Jewish movement of the United States of 1937 was a peace message to the planet that was entering World War II. Also was a call to contribute with the construction of a Jewish homeland in Palestine and the promotion of a strong identification with the religious practice. 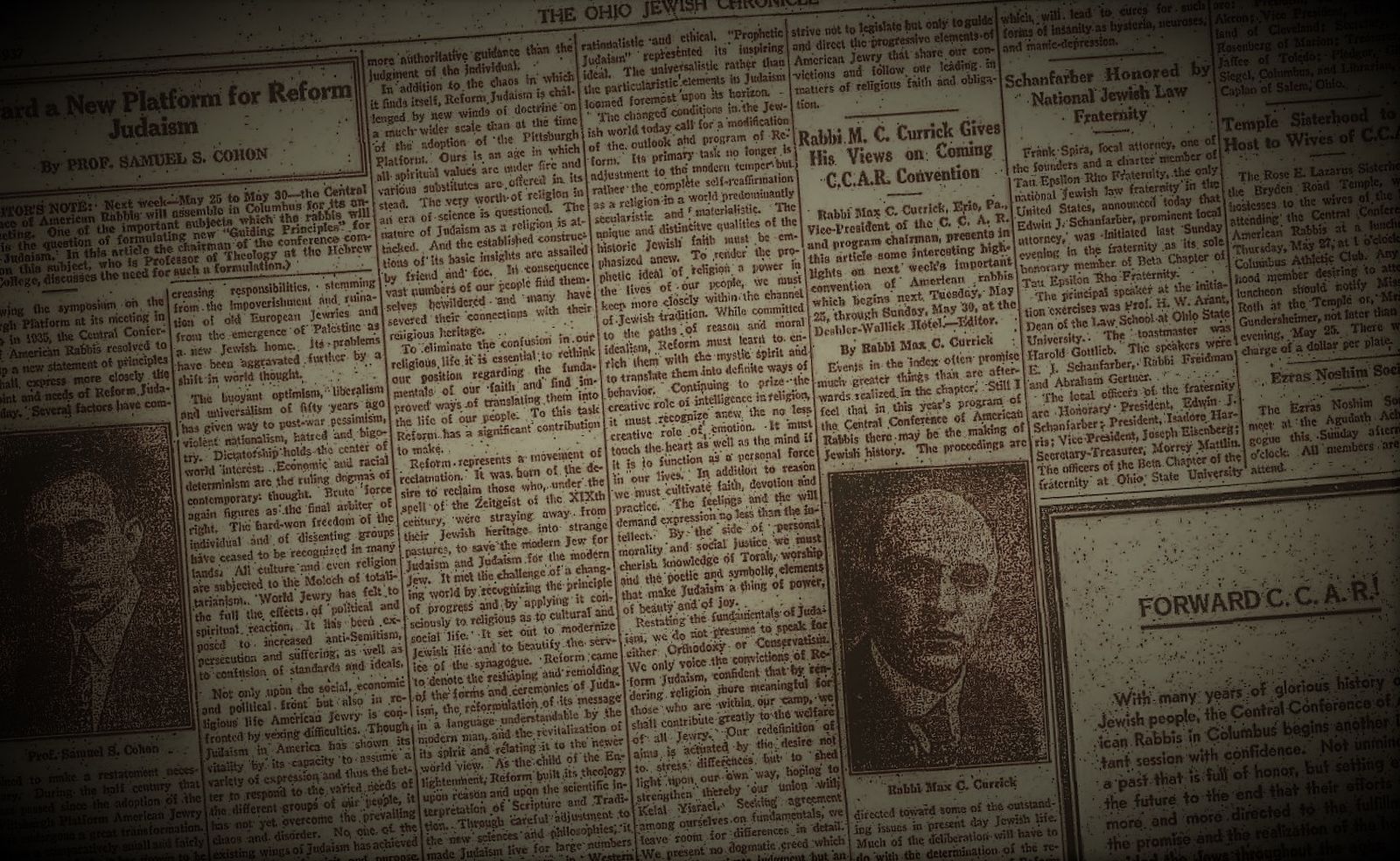 The beginning of the twentieth century was marked in the United States by an intense migratory wave of Jews from Eastern Europe that was leaving in a minority the progressive Jews of German origin who had initiated the liberal movement.

Being more Zionists and traditionalists in their religious practices, the newcomers entered the progressive communities demanding changes, among them, an explicit positive attitude toward the people of Israel. The growing anti-Semitism, not only European, but also American, demanded a new form of community and political organization.

Some progressive rabbis such as Bernard Felsenthal, Stephen S. Wise, Abba Hillel Silver, became fervent Zionists and pushed the progressive movement to modify its attitude. That change forced the drafting of a new principles’ framework that were embodied in the Columbus Platform of 1937.

Named “The Guiding Principles of Reform” introduced concepts on progressive Jewish thought: it declared as sacred both biblical and rabbinical literature; affirmed the validity of “the Torah, both written and oral” and, in a major change, affirmed “the obligation of all Jews to contribute in the construction of Palestine, as a Jewish homeland, striving to make it, not just a port of refuge for the oppressed, but also a center of Jewish culture and spiritual life.”

In addition, in response to the possibility of World War II, it emphasized the need of “universal peace” and “in physical and spiritual disarmament.”

The platform promoted a strong identification and emotional connection with Judaism, through an intense religious practice. Which was depict in the following prayer book of the progressive movement, The Gates of Prayer (GOP), edited by Rabbi Jaim Stern.

In view of the changes that have taken place in the modern world and the consequent need of stating anew the teachings of Reform Judaism, the Central Conference of American Rabbis makes the following declaration of principles. It presents them not as a fixed creed but as a guide for the progressive elements of Jewry.

A. Judaism and its Foundations

1. Nature of Judaism. Judaism is the historical religious experience of the Jewish people. Though growing out of Jewish life, its message is universal, aiming at the union and perfection of mankind under the sovereignty of God. Reform Judaism recognizes the principle of progressive development in religion and consciously applies this principle to spiritual as well as to cultural and social life. Judaism welcomes all truth, whether written in the pages of scripture or deciphered from the records of nature. The new discoveries of science, while replacing the older scientific views underlying our sacred literature, do not conflict with the essential spirit of religion as manifested in the consecration of man’s will, heart and mind to the service of God and of humanity.

2. God. The heart of Judaism and its chief contribution to religion is the doctrine of the One, living God, who rules the world through law and love. In Him all existence has its creative source and mankind its ideal of conduct. Though transcending time and space, He is the indwelling Presence of the world. We worship Him as the Lord of the universe and as our merciful Father.

3. Man. Judaism affirms that man is created in the Divine image. His spirit is immortal. He is an active co­worker with God. As a child of God, he is endowed with moral freedom and is charged with the responsibility of overcoming evil and striving after ideal ends.

4. Torah. God reveals Himself not only in the majesty, beauty and orderliness of nature, but also in the vision and moral striving of the human spirit. Revelation is a continuous process, confined to no one group and to no one age. Yet the people of Israel, through its prophets and sages, achieved unique insight in the realm of religious truth. The Torah, both written and oral, enshrines Israel’s ever­growing consciousness of God and of the moral law. It preserves the historical precedents, sanctions and norms of Jewish life, and seeks to mould it in the patterns of goodness and of holiness. Being products of historical processes, certain of its laws have lost their binding force with the passing of the conditions that called them forth. But as a depository of permanent spiritual ideals, the Torah remains the dynamic source of the life of Israel. Each age has the obligation to adapt the teachings of the Torah to its basic needs in consonance with the genius of Judaism.

5. Israel. Judaism is the soul of which Israel is the body. Living in all parts of the world, Israel has been held together by the ties of a common history, and above all, by the heritage of faith. Though we recognize in the group loyalty of Jews who have become estranged from our religious tradition, a bond which still unites them with us, we maintain that it is by its religion and for its religion that the Jewish people has lived. The non­Jew who accepts our faith is welcomed as a full member of the Jewish community. In all lands where our people live, they assume and seek to share loyally the full duties and responsibilities of citizenship and to create seats of Jewish knowledge and religion. In the rehabilitation of Palestine, the land hallowed by memories and hopes, we behold the promise of renewed life for many of our brethren. We affirm the obligation of all Jewry to aid in its upbuilding as a Jewish homeland by endeavoring to make it not only a haven of refuge for the oppressed but also a center of Jewish culture and spiritual life. Throughout the ages it has been IsraelÕs mission to witness to the Divine in the face of every form of paganism and materialism. We regard it as our historic task to cooperate with all men in the establishment of the kingdom of God, of universal brotherhood, Justice, truth and peace on earth. This is our Messianic goal.

6. Ethics and Religion. In Judaism religion and morality blend into an indissoluble unity. Seeking God means to strive after holiness, righteousness and goodness. The love of God is incomplete without the love of one’s fellowmen. Judaism emphasizes the kinship of the human race, the sanctity and worth of human life and personality and the right of the individual to freedom and to the pursuit of his chosen vocation. justice to all, irrespective of race, sect or class, is the inalienable right and the inescapable obligation of all. The state and organized government exist in order to further these ends.

7. Social justice. Judaism seeks the attainment of a just society by the application of its teachings to the economic order, to industry and commerce, and to national and international affairs. It aims at the elimination of man­made misery and suffering, of poverty and degradation, of tyranny and slavery, of social inequality and prejudice, of ill­will and strife. It advocates the promotion of harmonious relations between warring classes on the basis of equity and justice, and the creation of conditions under which human personality may flourish. It pleads for the safeguarding of childhood against exploitation. It champions the cause of all who work and of their right to an adequate standard of living, as prior to the rights of property. Judaism emphasizes the duty of charity, and strives for a social order which will protect men against the material disabilities of old age, sickness and unemployment.

8. Peace. Judaism, from the days of the prophets, has proclaimed to mankind the ideal of universal peace. The spiritual and physical disarmament of all nations has been one of its essential teachings. It abhors all violence and relies upon moral education, love and sympathy to secure human progress. It regards justice as the foundation of the well­being of nations and the condition of enduring peace. It urges organized international action for disarmament, collective security and world peace.

9. The Religious Life. Jewish life is marked by consecration to these ideals of Judaism. It calls for faithful participation in the life of the Jewish community as it finds expression in home, synagogue and school and in all other agencies that enrich Jewish life and promote its welfare. The Home has been and must continue to be a stronghold of Jewish life, hallowed by the spirit of love and reverence, by moral discipline and religious observance and worship. The Synagogue is the oldest and most democratic institution in Jewish life. It is the prime communal agency by which Judaism is fostered and preserved. It links the Jews of each community and unites them with all Israel. The perpetuation of Judaism as a living force depends upon religious knowledge and upon the Education of each new generation in our rich cultural and spiritual heritage.

Prayer is the voice of religion, the language of faith and aspiration. It directs man’s heart and mind Godward, voices the needs and hopes of the community and reaches out after goals which invest life with supreme value. To deepen the spiritual life of our people, we must cultivate the traditional habit of communion with God through prayer in both home and synagogue.

Judaism as a way of life requires in addition to its moral and spiritual demands, the preservation of the Sabbath, festivals and Holy Days, the retention and development of such customs, symbols and ceremonies as possess inspirational value, the cultivation of distinctive forms of religious art and music and the use of Hebrew, together with the vernacular, in our worship and instruction.

These timeless aims and ideals of our faith we present anew to a confused and troubled world. We call upon our fellow Jews to rededicate themselves to them, and, in harmony with all men, hopefully and courageously to continue Israel’s eternal quest after God and His kingdom.