On Rosh Hashanah the tashlich ritual states: throw pieces of bread into running water in order to get rid of your transgressions. Although surrounded by spiritual meaning, a problem emerges from this act: the transfer of personal waste, even if symbolic, to a place in nature that belongs to everyone. In this sense, what would be the consequences if everyone tried to get rid of what bothers them, disregarding the collective concept so emphasized on Rosh Hashanah, when we remember the creation of the world?

Rabbi Ed Rosenthal proposes a reversal of the tashlich: instead of throwing waste into the sea, which increases dirt, let’s collect the debris accumulated in the sea. Thereby, to fulfill the intention of the tashlich of bringing purity, the ritual is reversed and the act of throwing out is replaced by the act of collecting. This reversal of the procedure helps to preserve the purpose of the ritual. This is the spiritual mathematics that leads from inversely proportional to conversely purposeful (in pursuit of the intended purposes).

While the suggestion for the tashlich is recent, the idea of ​​inversion goes back centuries. The prophet Isaiah, whose message we read on Yom Kippur, asks a rhetorical question: “what is fasting but breaking bread with the hungry?” According to the prophet, the exacerbated concern with fulfilling the mitzvah of fasting at an individual level would be contrary to the intentions of this act. To avoid this, there is a reversal of the mitzvah in search of purposefulness: don’t think about what you have given up eating, but what you aren’t sharing.

The period of Rosh Hashanah and Yom Kippur is a period of teshuvah, which means both repentance and response. Through repentance we find the answers to it. They are a response to ensure us that we are on the right path. There is a risk, however, of our mistakenly taking wrong paths to correct our wrongdoings by relying on answers that have already been established. This will not allow for new acts of repentance, since regrets will be ruled out by the certainty of the previously endorsed answers. From time to time, it is important to reverse an answer into a new question in order to ensure that the purpose of teshuvah is preserved. For, even though faith is established by certainties and convictions, it needs to be shaken, rocked and inverted for its genuine purpose to be expressed.
The prayers said during Yamim Noraim suggest that this is when fate is written down and signed, yet, at the same time, there is a warning that there is no fatalism involved in this, since it is possible to reverse fate through prayer, repentance and acts of justice. What if the objective is to create fear of the eventual outcome of our lives so that we try to reverse the designed fate, by reviving the purposes that prayer, repentance and justice give rise to?

Neila, which means closing, is the climactic moment; it could lead us to infer that the opportunity for forgiveness and repentance has ended. This closing, however, can constantly be reverted, as taught by the Midrash: “the gates of repentance are always open”. The permanent possibility of meeting with purposefulness reverts the immutable condition of what is stated as closed and makes way to new opportunities.

Whether for the sake of comfort and security, or for comfort and inertia, we would have preferred the paths of existence to be straight, unchanging sequences, one stage leading to another. This belief, however, would lead us to an illusion which might foster disappointment when unexpected challenges arise; it may also intensify frustration as a result of the inability to deal with the unforeseen, as well as jeopardize enjoying the charm of the non-predicted, of what simply happens. Step by step, reversal allows us to see and, above all, to re-envision purposes since it offers us a new perspective of the year that is about to begin. It also allows us to extend this change in perspective to all the years to come, if we uphold our commitment to the quest of purposefulness, and continue to invert, in a novel way, what has been reverted before.

Sérgio Margulies is the rabbi of Associação Religiosa Israelita of Rio de Janeiro and president of the Conselho Rabínico Reformista do Brasil (Reform Rabbinical Council of Brazil). 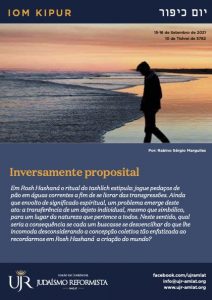 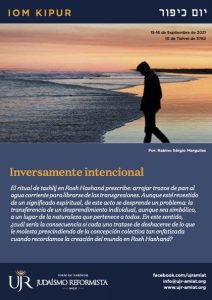 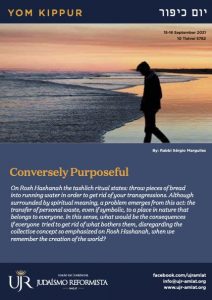