Once the students invited their master, Ben Azzai (2nd century, Israel) to share a good teaching about “Megillat Kinot” (the Biblical Book of Lamentations/Eichah that is read every Tisha beAv). In his wit, he told them the letters of the word Eichah (אֵיכָ”ה – How can it be?) that opens the Book of Lamentations and is generally used as reference to the book itself) are the combination of the several transgressions of the Jewish people: Aleph (1) for rejecting the G-d that is one, Yud (10) for breaking the 10 commandments, Chaf (20) for making little of the Brit Milah which was delivered to the 20th generation, and finally Hey (5) for ignoring the teachings of the Five Books of Torah (Eichah Rabbah 1:1).

In other words, Ben Azzai tells us that “How can it be?” is due to the very transgressions of the people of Israel. The absorbed question, since the pain felt by the prophet Jeremiah as he saw Jerusalem razed, the Temple destroyed, the people in ruin and death everywhere, had an answer: the very transgressions of the people of Israel. This “theology” is very much present in all the classical Jewish rabbinical thought. In the Talmud (b. Shabbat 199b) there are countless reasons for which the Temple of Jerusalem was destroyed: from the parents who stopped sending their children to school up to not saying Shema Israel daily because the youth would equate themselves to the adults, or because they wouldn’t be admonished and wouldn’t correct each other. Also famous is the quote which says that Jerusalem was destroyed by “gratuitous hate” (b. Yoma 9b). And in every Musaf prayer till our days we repeat as a mantra “for our sins we were exiled from our land”.

In a sense, these readings have conformed the “culpogenic psyche” of the Jewish people, making us absolutely responsible for our own tragedies, having to assume the responsibility that our national home be conquered by foreign powers, that our Temple be destroyed, or that our coreligionists be killed for the simple fact that they’re Jews. In this sense, this way of reading our own history (be it national or personal) can do us much harm, generating a feeling of guilt so large it sinks us in pain, in depression and in hopelessness.

Nevertheless, I believe that our Sages, in their infinite wisdom, didn’t seek this but a guilt that would be an engine for reflection, repentance and resilience. In each of the rabbinical aphorisms and stories (see Gittin 55b-58a), classical in relation to the tragedies ocurred in Tisha beAv, especially focusing the destruction of the Second Temple, the Sages read the story not placing blame and responsibility on the other (in this case, Rome) but on the very behaviours of the Jewish people. The sages understood that it was worth nothing telling the story, saying the Roman victory was due to military supremacy, but understood that this historical happening could help us reflect as Jewish community about our practices and moral failures.

Facing each tragedy we can look for someone to blame or place the blame onto ourselves. Knowing, even consciously, that we are not fully to blame for what happened, our rabbis suggest not blaming God or the “enemy” (the Other) for a national or personal tragedy, but taking this opportunity to review and better ourselves. Each Tisha beAv is an opportunity to not only mourn the misfortunes of the past, but also to build our future based on the teachings our past has bequeathed us.

Facing each tragedy we can look for someone to blame or place the blame onto ourselves. The “Jewish” question facing a tragedy is never “Why me?” but “How can I be?” (Eichah) or perhaps “Where are you?” (Aiekah). Let us remember that both words, the famous lamentation of Eichah and the eternal Biblical question from G-d to the human being Aiekah (Gen. 3:9) are written the same way. The question of “Why me?” is never proper and is even harmful. The question should be “Where am I?”, “How could it be?”, “And now, what can I do?”.

May this Tisha beAv be not only a day of mourning but also a day of reflection. May we learn as a community (and at the individual level) that the answer is not without but within ourselves. That the questions worth asking are the questions that will help us build from the destruction. 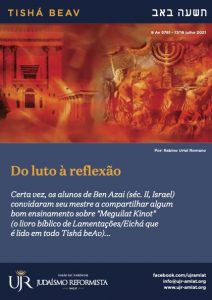 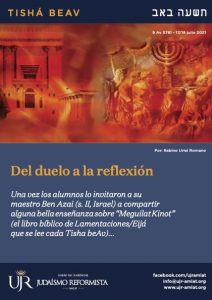 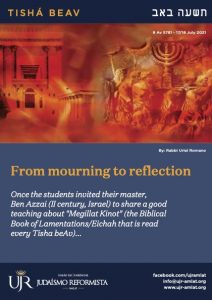