The domination of the Roman Empire in Judea in the first century of the Common Era was one of the most terrible chapters in the history of the Jewish people. From the destruction of the Temple in 70 CE, the Romans faced a series of sporadic revolts, in their majority badly organised and without success. In the second century of the Common Era, the leader Bar Kochba started a series of organised revolts, spiritually supported by Rabbi Akiva, one of the most renowned sages in the Jewish world, and the Jewish people saw a brief light of hope, of liberation, before the great oppressive force.

However, during the Omer period in those times, something happened, that would convert those days into a period of partial mourning: a pandemic, which reminds us of the days of today, but with no organised healthcare system, no vaccines, no masks, no modern medicine. Thirty-two days lasted the occasion, and it affected as many Jews as it did Romans. This “Covid” of yesteryear ended the lives of thousands of people. Among the ranks of Rabbi Akiva’s students and the militants, as well as the general populace, it is calculated that some twenty-four thousand perished. If these numbers don’t say anything by themselves, maybe one can grasp the magnitude of the disaster with a simple calculation if we consider that, on average, a person would die every two minutes. It’s because of this tragic event that fell during the forty-nine days of the Omer that no weddings or large celebrations, with music or dance, are held. The more religious or traditional don’t shave their facial hair nor get haircuts during the first thirty-two days. In Israel, it’s also a period of seasonal change between spring and summer, and it’s common for people to gradually start feeling the desperate days of extreme heat.

Lag BaOmer literally means, in Hebrew, “the thirty-third (day) of the Omer”. Lag isn’t a word by itself but the numerical representation of the value from the letters that make it: Lamed – thirty, and Gimmel – three, making a total of thirty-three. Tradition tells that in the thirty-third day of the Omer, this terrible plague mentioned before ceased, and there were no more deaths. Years after the plague ceased, and also on a Lag BaOmer, passed the great rabbi Shimon bar Yochai (the Rashbi, by his initials), a disciple from none other than Rabbi Akiva. The Rashbi, like his predecessor, was vehemently in political opposition to the Romans, and spiritually supported the fight against Rome. In the Talmud, in tractate Shabbat 33b, it’s narrated about the opinion of the Rashbi on the Roman government:

“Rabbi Yehuda and Rabbi Yosei and Rabbi Shimon were sitting. Rabbi Yehuda opened and said: How pleasant are the actions of this nation, the Romans, as they established marketplaces, established bridges, and established bathhouses. Rabbi Yosei was silent. Rabbi Shimon ben Yochai responded and said: Everything that they established, they established only for their own purposes. They established marketplaces, to place prostitutes in them; bathhouses, to pamper themselves; and bridges, to collect taxes from all who pass over them. Yehuda went and related their statements to his household, and those statements continued to spread until they were heard by the monarchy. They ruled and said: Yehuda, who elevated the Roman regime, shall be elevated. Yosei, who remained silent, shall be exiled from his home in Judea as punishment, and sent to the city of Tzippori in the Galilee. And Shimon, who denounced the government, shall be killed. Rabbi Shimon bar Yochai and his son went and they hid in a cave. A miracle occurred and a carob tree was created for them as well as a spring of water. They would remove their clothes and sit covered in sand up to their necks. They would study Torah all day in that manner. At the time of prayer, they would dress, cover themselves, and pray. They sat in the cave for twelve years. Elijah the Prophet came and stood at the entrance to the cave and said: Who will inform bar Yochai that the Caesar died and his decree has been abrogated?”

According to tradition, during those twelve years living in extreme conditions in a cave in Peki’in in the north of the Galilee, the Rashbi wrote, inspired by his deep knowledge of Torah, the book of Zohar (splendour) that was kept secret for hundreds of years, only reachable by rabbis, and today the base of all Kabbalistic studies. The Rashbi, knowing the mysteries of Kabbalah, taught his disciples that he awaited the day of his own death with joy, for then he would be able to know and experience all that he had learned and written on the book of Zohar. Because of this, he requested the day of his passing to be remembered not in mourning but with much light and joy.

After the recent elections, Israel lives hard days in its political and social life. Coupled with that, the pandemic that Israel lives may make it so that, in this 2021, the celebration festivities stipulated by the Rashbi don’t reach a Zohar (splendour) as in yesteryear, because of the distancing limitations. We get to an Israeli Lag BaOmer, in pandemic times such as that one that lasted 32 days and deeply affected our people. We get to a Lag BaOmer with a new government as divided as the political ideas the Rashbi and Rabbi Yehuda had in their time, but with a “water spring” miracle and a small Zohar (splendour) light, because for the first time the Knesset (the Parliament) counts with a new Chaver (member) with liberal ideas: Reform rabbi Gilad Kariv. I pray the ideas of change and reform are no longer “hidden in a cave” nor “sitting covered in sand up to their necks“. At the personal level, “twelve years in a cave” have passed since the year 2009, when I eagerly started my path to a Reform rabbinate. This new splendour of the 33rd day in 2021 is very meaningful to me and for the Reform world around the globe, and just as requested by the Rashbi, I hope with joy that now, in Lag BaOmer, we may celebrate, even with distancing and even with Covid, a new light of splendour in the political and social life of Medinat Israel. Yechi Medinat Israel! Long live Medinat Israel! 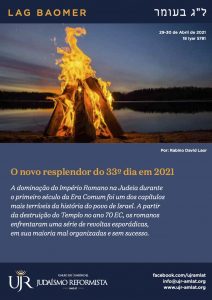 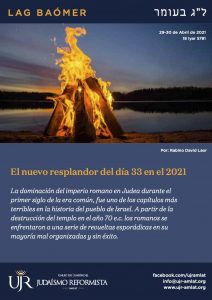 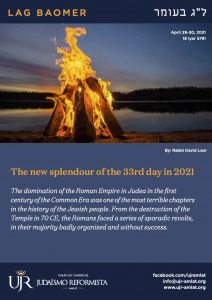