The World Union for Progressive Judaism is celebrating a great milestone. Our movement is 100 years old, but in many ways, we are still a young organization. The reason for this is that there have been many WUPJs over the last century. There was the WUPJ that gave Jews an intellectual and cultural home during the tumultuous interwar years in Europe.

These, amongst many other WUPJs, all had several things in common. They were grounded in the values that have defined liberal Jews since the enlightenment, and they continued to find solutions for living fully in the larger world while still holding close our Jewishness. WUPJ has never been afraid to face hard questions about our future as a people. We can do this, because we have a vision for progressive Judaism that both deals with the challenges of Jewish continuity in the face of modernity and with Judaism’s relevance in the lives of our individual members. It is that vision for the next 100 years that I want us to focus on as we celebrate the last 100 years.

WUPJ’s strategic vision for its next century will start by looking to the years between 2021-2026. For many years I have been inspired by Franz Rosensweig’s work of modern Jewish philosophy: The Star of Redemption.

In this important work of Jewish thought, we see the Star of David as a geometrical system that can represent and connect us to the different aspects needed to find meaning and purpose not only for our organization, but for us as Jews.

As we know, the Star of David is formed by two intertwining triangles. 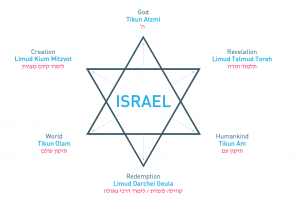 The first triangle encloses the space for Tikkun, a verb, an act of repairing: God (Tikun Atzmi), Humankind (Tikun Am), and World (Tikun Olam).

1) Tikun Atzmi (God): Here we look to repair the divine spark within ourselves through a spiritual experience of living in communities of practice that support renewal. To change the world, we must first change ourselves. However, we do not change alone; our individual spiritual quest must be part of a process of building networks of belonging, and communities with shared values that span great distances.

2) Tikun Am (Peoplehood): We look at ways to repair our own social fabric as a Jewish people. We are the heirs and beneficiaries of a particular civilization with its own culture, language, history, and a collective memory. This connection to our past and shared peoplehood serves to connect us through time and space amongst the diversity of our global Jewish experiences.

3) Tikun Olam (The Larger World): Our Jewish peoplehood is only the starting point, and those values serve to guide us as we find our place in the larger human family. The same values and commitments must be used to repair and strengthen our relationship and connection to all of humanity, and to the planet itself. Jewish values must be translated into actions that impact our world.

1) Limud Kium Mitzvot (creation): We seek a Judaism that celebrates mitzvot through the act of creating our diverse responses to ongoing challenges. We seek a Judaism composed of shared practices which are not reduced to simply dogma or the sole domain of one religious denomination. We need a Judaism that is the result of our collective creativity and shared desire to find meaning in our traditions.

2) Limud Talmud Torah (revelation): We see revelation as an on-going process between us and the divine. This is a process that requires study, reflection, dialogue, and critical thinking. Our evolving interpretations not only welcome pluralism, diversity, and creative dialogue, but demand it. This has always been the process through which Jews studied the Torah.

3) Limud Darchei Geulah (redemption): We need a vision of redemption that includes our struggle against anti-Semitism and anti-Zionism at all times and in all places. This redemption involves working towards a vision of a Jewish State that is democratic and respects and protects the rights of all minorities. These are the same rights that were denied to us for so many centuries. We affirm a reform Zionism that promotes the development of an Israeli society based on these values.
In this model of a renewed Star of David, at the center of the two intersecting triangles is Israel. Israel is the symbol of Jewish redemption, but its full potential to be a “light for the nations” is still unrealized.

We acknowledge the centrality of Medinat Israel for our Reform movement. WUPJ affirms its conviction that to be a progressive Reform Jew is to be a Zionist. We will not allow those who want to conflate Zionism with their anti-democratic agenda to define what it means to be a Zionist. We will challenge and revisit Zionism through that lens. From Hertzl’s dream to the present day, as reformers, we know that we must keep a vision of what our national redemption can mean to us and to the rest of the world.

In summary, the two intertwined triangles, with Israel at the center, articulate the six vertices in the Star of David that forms the core of my vision for the next five years. This Star of David, inspired by Rosensweig’s star of redemption, symbolizes the ideological and programmatic guidelines of a Reform/Progressive Judaism that seeks to regain its central role in our lives.

Reform means to re-form, or to give a new shape, and it is a process of constant evolution. We define ourselves through a verb, or motion, and not as a finished product. For me, Judaism is notdogma, and we must not be afraid to face our own reform. We will not lose the roots that make us connected to the Jewish tradition. We know who we are and our strongly rooted identity should allow us to open ourselves up to dialogue and exchange. We will learn together how to deepen the spiritual challenges of a Judaism faithful to tradition and relevant to today’s context.

The implementation of a vision

Different historical periods have their own metaphors to implement high impact innovations. Today, we are all familiar with the concept of incubators. Originally conceived in the fields of biology and medicine to provide optimal conditions for breeding and growth processes, now a days there is a wide range of incubators that focus on a diversity of areas from social ventures to high tech startups. Incubators provide access to resources and social networks, seed funding, mentoring and training in a collaborative environment. We will be launching an incubator for projects that seek high social impact in the Jewish world. We will learn from the myriad of already existing incubators and accelerators and craft our own. The Star of David will provide a framework for launching programs that have Israel, as defined above, at the center of the intersecting triangles and that share our common vision and goals.

The following are some examples of concrete initiatives that could be housed in our new WUPJ incubator. Some of those projects are likely to be developed and accelerated in the incubator, others might not be fully realized, but what is important is that we create a mechanism for sinsere exploration of new ideas and new ways of allowing our members to approach Judaism, Israel, and their thirst to see our improve.

I am convinced that an existential philosophy that promotes a reform / progressive Judaism as a praxis of being and of building communities of meaning, in conjunction with an incubator of initiatives with high social impact in our Jewish and universal practices, will renew and reform our capacity to confront the enormous challenges ahead of us.

This is our program, to be global (World) in vision and local in action in each region, to be united (Union) with shared values in our strength of being originally diverse with our particular identities.

We promote a progressive vision in creativity, disruption, originality and innovation (Progressive) for a wide cultural, national and spiritual identity (Judaism) in its different praxis that allow us to do our part to make the world a better place where the WUPJ does its contribution by leaving our mark for the next century.

Rabbi Sergio Bergman is the president of the World Union for Progressive Judaism (WUPJ).