In its biblical sources, the holiday of Shavuot is characterised by the moment of the year in which it happens (50 days after Pesach, when the wheat was harvested) and by the offerings made to God, be it animal sacrifices, bread or the first fruits. Except for the moment of the holiday itself, the other biblical dimensions all referred to agricultural practices in the Land of Israel. Following the Jewish diaspora, with many communities outside Israel, these aspects of the festival lost their relevance to a large part of the Jewish world.

Despite there being no passage connecting the festival of Shavuot to the giving of the Torah, we have elements that justify this association. As in a detective’s work, there are two large pieces of evidence pointing to the giving of the Torah in Shavuot. First, there’s the question of time: Shavuot is described as being celebrated 50 days after Pesach and, despite it not being explicitly mentioned that those 50 days are referring to Pesach Mitzrayim, the actual departure of the Hebrews from the land of Mitzrayim, the temporal association between the events that gave origin to both holidays seems rather reasonable. According to this line of reasoning, seven weeks after liberation from servitude, something very significant would have happened to the Hebrews, justifying a more central date in the Hebrew calendar. The second evidence is that in Shavuot, more than in any other of the four festivals described in the Torah¹, the Hebrew people were instructed to offer their best possessions in their pilgrimage to Jerusalem. What could we have received in Shavuot that would justify such generosity, even if centuries later?

In rabbinic imagination, the answer was obvious: it was in Shavuot that the people had been given the Torah! In the middle of the wilderness, amongst the almost limitless amplitude that environment offered, God had revealed Themself once more to the Hebrew people with thunder, lightning, and a pact that would define us from then on, represented by the Torah we were being given there.

The word “Torah” is sufficiently vague for the rabbinical tradition to be able to digress about what had actually been revealed at Mount Sinai. In its minimalist vision, Shavuot celebrates the giving of the Tablets of the Law with the “Ten Affirmations”²; in its maximalist version, God would have revealed to Moshe all the Jewish tradition, including the 24 books of Tanach, the Oral Torah and even an innovation said by an experienced student to their teacher today!³

The most revolutionary about the giving of the Torah in rabbinic concept is, however, the plural form that this fundamental moment of Jewish identity was understood and described in midrashim. According to countless passages of rabbinical literature, the people had multiple experiences at Mount Sinai and left that founding event with distinct understandings of what had been revealed. Lecha Dodi, for instance, one of the most traditional songs of Kabbalat Shabat, affirms in its first stanza: שמור וזכור בדיבור אחד, “Shamor veZachor b’Dibur echad”, “‘Keep’ and ‘Remember’ in a single Affirmation”, in reference to the two versions of the instruction given for us to keep the Shabbat, as related in Ex. 20:8 and in Deut. 5:12. Indeed, the biblical text presents some divergences between the two versions of the Ten Affirmations – that were understood as evidence that the Torah had been Revealed in multiple voices and that each soul present in that moment had captured distinct combinations of those voices that revealed themselves.

The diversity we perceive today in Jewish tradition is not, therefore, an accidental mishap, but premeditated result of the way God established Their pact with us, giving space for each to relate to their own Judaism according to their own capacity, aptitude, personality and interests. That’s where our strength comes from! Far from being a single solution, Judaism, since the Revelation at Mount Sinai, resembles an orchestra, where each instrument contributes distinctly to the greatness of the final result. Imagine how monotonous it would be an orchestra of a single instrument, everyone playing the same version of the song!

We live today in a special moment of Jewish history, in which the diversity of perspectives has been revalued; in which segments, whose voices were traditionally muffled, conquered their seat at the table; and in which there is a new spirit to rescue the creativity that characterised our relationship with tradition for so many centuries.

The Kotzker Rebbe was asked why Shavuot was called the festival of the “giving of the Torah” and not the festival of the “receiving of the Torah”. His answer was that the Torah had been given in a time and place, but was being received every moment, everywhere.⁴ From the cheesecake recipes to the new readings of the classical texts, the Jewish people have nothing  but to gain when more students bring their innovations to their teachers and, thus, we relive the moment of Revelation at Mount Sinai, the moment that Shavuot celebrates!

Chag Matan Torah Sameach! Happy Festival of the Giving of the Torah! 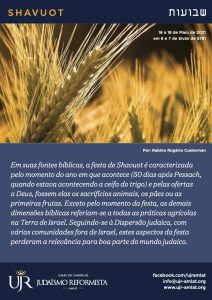 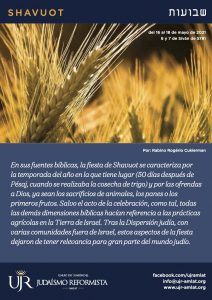 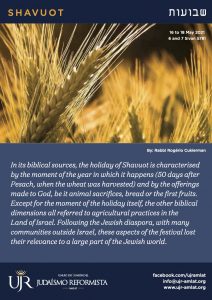