If something has kept Jewish tradition alive for millennia, it is its ability to adapt to new contexts and respond to social changes, existential quests and vital processes based on ancestral texts that are reread and ancient practices resignified and recreated by the eyes and hands of every generation.

While people generally seek to discover something that no one has seen before – to have an innovative and revolutionary idea – the Jewish method has always gone in the opposite direction. When that glorious moment is before us when something original occurs to us, we take the opposite path. It’s about looking for someone who said it before, naming it and also knowing who was based on the latter and who did the former, and the former to add a new look. It is this current of wisdom and creativity that keeps people alive around a reinterpreted text that gives meaning to their rituals.

Hanukkah is, in many ways, the festival of miracles. Not one but many. On the one hand the victory of the strength of a small group against a mighty oppressive army, on the other the triumph of the eternal spirit of Israel in the re-inauguration of the sacred bond with God and the turning on of the light that symbolically represents the Torah in its broadest sense.

We could also find in the same determination to have lit the candle an exceptional fact. Even though there wasn’t enough fuel a priori to keep the fire going until they got more, they decided to do it. They agreed (in fact nothing less than seeing our social and community reality) and took that essential first step so that the unexpected could happen.

I would like to bring one more glance, perhaps not so explored, but which probably responds, two millennia later, to a reality that we find today at a global level. I see a close connection between Hanukkah and caring for the planet. Our tradition brings us the principle of respecting and preserving the environment in a large number of sources, symbols and traditions. A well-known verse from the Torah tells us: “You shall not destroy the trees” (Deuteronomy 20:19) and on the positive side we find the idea that we are in this world and on this earth “leovdah uleshomrah”, to work and protect it (Genesis 2:15). It is a mitzvah, a commandment.

And where is the relationship between taking care of our natural resources and Hanukkah? Generally and from the rabbinical interpretation, we say that the pot of oil that lasted to keep the fire for 8 days instead of 1 (or less) as they calculated, happened by a supernatural miracle. Maybe something else happened: they found a way to extend the life of the fuel without wasting it as they used to do until now, and so, by developing some type of technology at the time, they managed not only to solve the problem but also ecologically.

Today, faced with climate change and the need to use the planet’s resources wisely, we see the urgent need to make changes. Some of them go against our lifestyle and we resist them even though we know how essential they are. The story of Hanukkah today calls us to responsibility. These Maccabees not only lit the flame, they made it more sustainable and left us a hidden message: rediscover today that it is essential to make decisions that take better care of the planet. Just as they purified the desecrated sanctuary and rededicated it, today we must cleanse ours, that is, the world we inhabit, which in uncontrollable greed was also violated and contaminated, in order to return to the plan of handing it over to a new generation. that I can enjoy and live in it.

May Hanukkah inspire us to responsibly bring light, which not only illuminates us, but allows the children of our children to illuminate theirs as well. 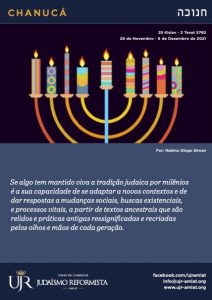 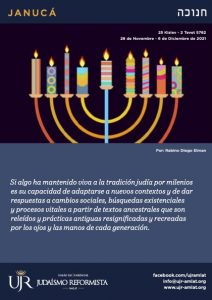 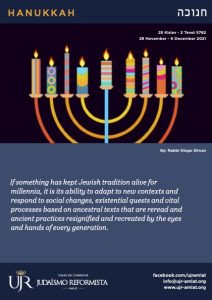